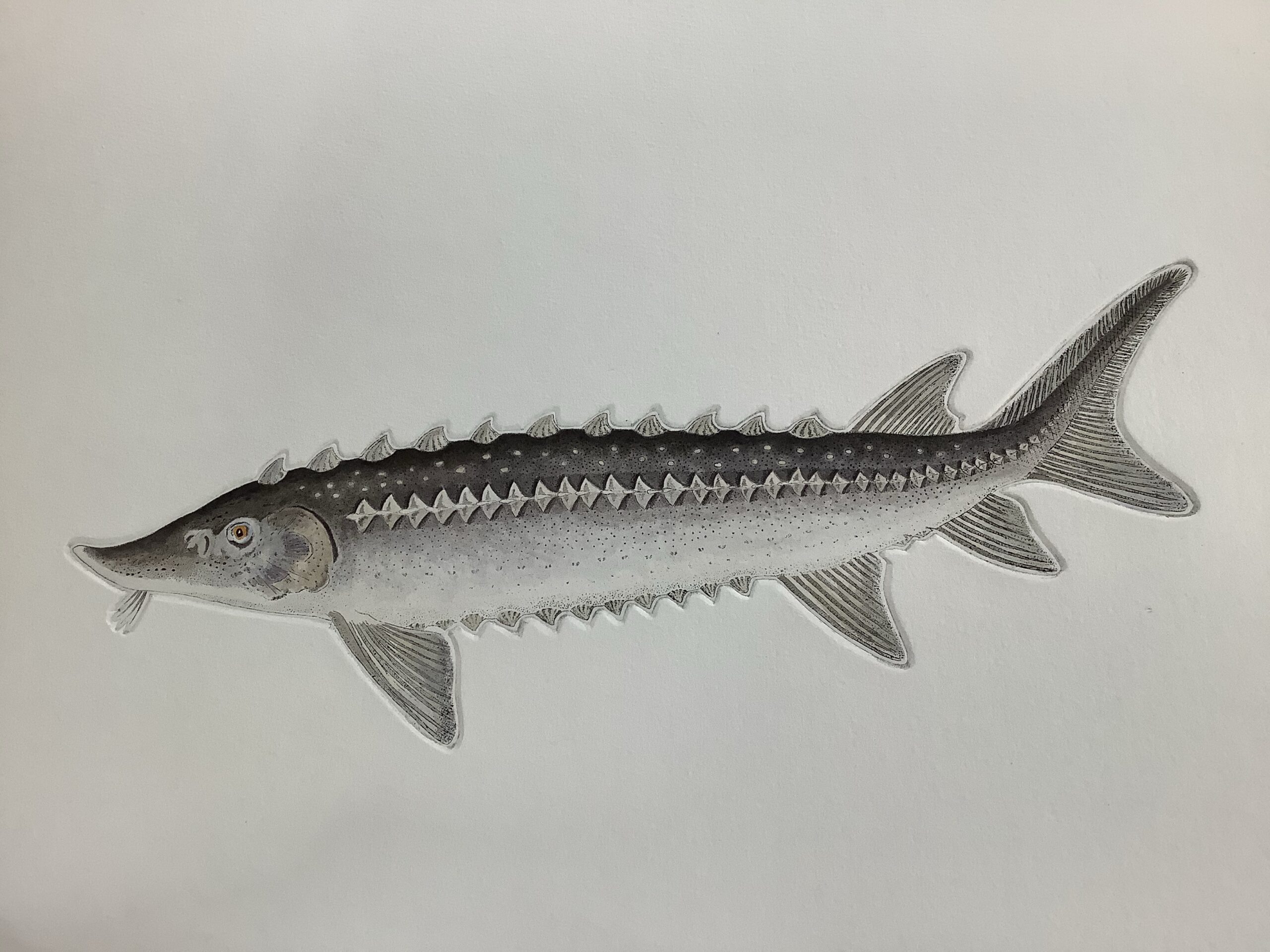 The inspiration behind the etching of the Sturgeon is from drawings of a beautifully modelled silver Sturgeon on a caviar dish belonging to friends. While at Seville Aquarium earlier this year, I was able to observe Sturgeons at very close quarters, so this print is a combination of drawings of the silver fish and live specimens.

Seville Aquarium is situated on the banks of the Guadalquivir River where sturgeons used to be found, sadly they are virtually extinct there. The shape of the fish intrigued me, the skeleton is mainly cartilage with shield shaped bony plates in rows along the body and angular spines on it’s back and belly, it’s snout is long and shovel shaped. All the different elements I love to draw!

I was curious about this fish as it is also regarded as a ‘living fossil’ rather like the Coelacanth. They spend the first three years of their lives in the rivers where they are born before venturing into the sea. The fish matures at around 20 years old, with the female laying up to three million eggs, although spawning only occurs every two or three years. The lifespan can exceed 150 years.

The copper plate was cut out roughly with a jigsaw before the wax ground was applied. After I had etched it, I spent two days filing and burnishing the edges. I need to practice my jigsaw cutting skills…

Plymouth is the home of the Marine Biological Association . The laboratory is perched high on Citadel Hill on the Hoe, with breathtaking views of the Cattewater, Mount Batten, across the Sound to Drake’s Island, Mount Edgcumbe and the Tamar. I have very fond memories of visiting the original aquarium there when I was a child. The aquarium is long gone but I still feel a sense of awe remembering some of the people who worked there and the people who work there now. I’ve been a member for over 25 years and have access to the incredible resource of the library, the home of many priceless books and archives. There is a copy of Charles Darwin’s ‘Origin of Species’ which had been presented to the MBA. It was signed by the author, unfortunately the benefactor did not entirely agree with some of Mr. Darwin’s thoughts, and the page with the signature had been removed!

Sitting in the common room admiring the views with a cup of coffee provides the perfect opportunity for me to talk fish….

One such chat was with Dr. Gerald Boalch, a marine phycologist who has worked at the MBA for 60 years. I mentioned that I’d been working on a new etching of a Sturgeon. He recalled one being landed and given live  to the lab. The Sturgeon, being a Royal fish had to be offered to the Queen.  Enquiries were made and the authorities said that indeed the Queen would like the fish as she was holding a banquet. The fish, awaiting the outcome had been put into the large reservoir tank under the building. Catching the fish with a net proved impossible, so the tank was emptied and the fish was duly despatched to London.

Another story Gerald recalled was of his father who was a fishmonger. He procured a large Sturgeon after the Palace had declined it. It was sold to a hotel to be a centre piece for their Christmas celebrations. The fish was beautifully decorated, but sadly no one wished to try it or disturb the chef’s handiwork and it was removed untouched to the kitchen overnight.

Unfortunately, some rats had a particularly good Christmas night feast on it……