The Making of the Scorpion Fish Plate & Print 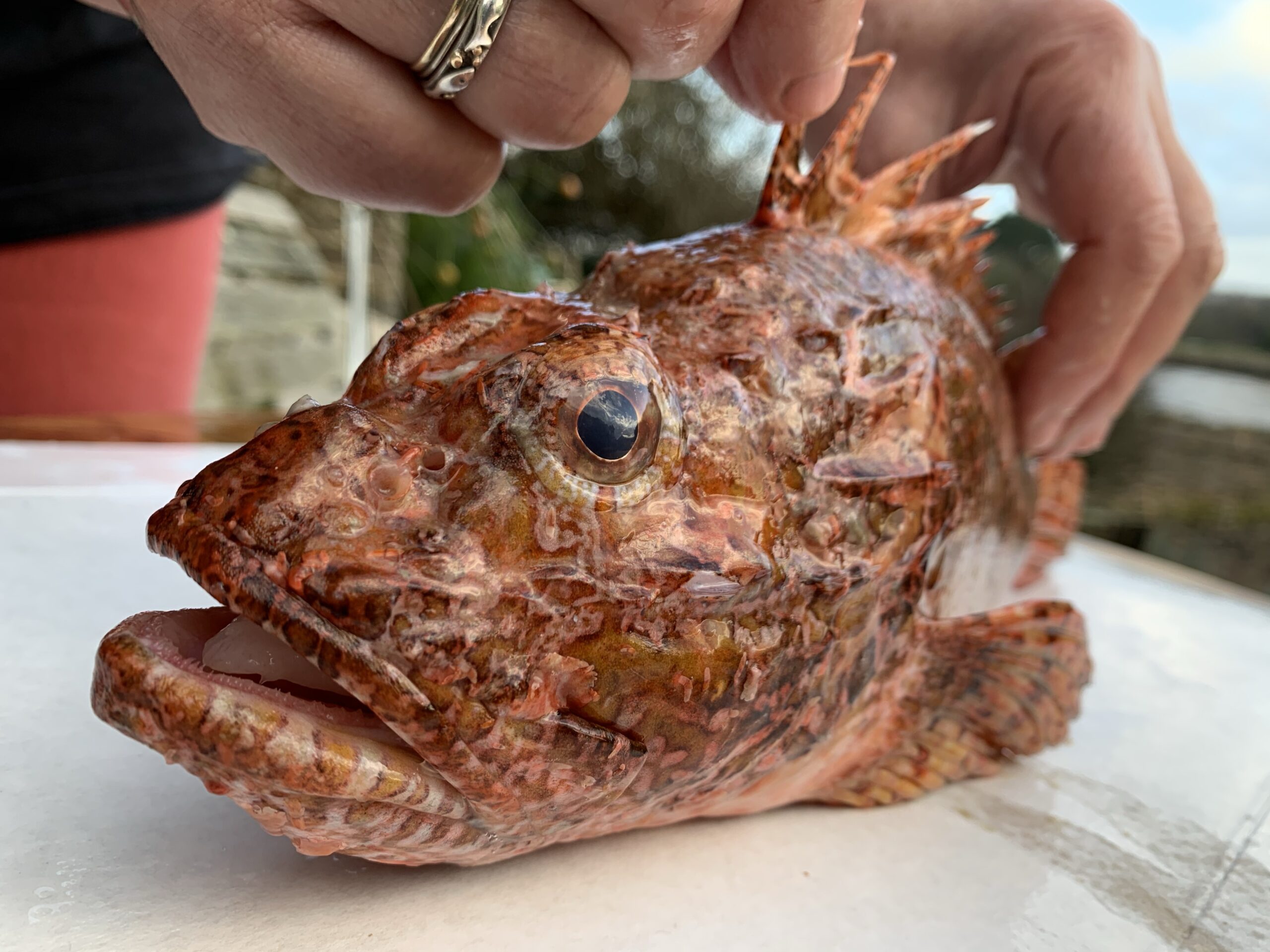 The Scorpion fish has always been intriguing to me as it looks grumpy, lumpy and somewhat exotic for Plymouth Sound.

This particular specimen was landed at the Plymouth Fish Market and luckily (for me!) spotted by Moby Nick, one of the local fish merchants, whom I ask to lookout for unusual and rare species from the fishermen’s catch. I swopped this one for some homemade marmalade and damson gin and it went into the freezer until I had time to draw it.

Scorpion fish are found in British waters, but you would rarely see them on a fishmongers slab in the UK, they are more likely to be seen in French markets as ‘Rascasse’ and one of the vital ingredients for Bouillabaisse!

Many years ago, whilst on a camping holiday in the South of France, I had the opportunity to go for a dive at Sardinaux in the Bay of St.Tropez. Here I spotted my first Scorpion fish, they are extremely well camouflaged, however, I managed to see a pair nestled amongst coral around the base of the lighthouse.

I remember the dive very well, beautiful clear blue water, sunshine and blue skies. I had hired the kit from a local dive firm and only had half a wetsuit, no depth gauge and no computer!

Work starts on drawing the image with an etching needle

I first create preliminary sketches which are then used as a guide to cut out a copper plate, once cut out, and the edges roughly filed, I apply a wax ground to the plate and begin drawing into the wax surface with an etching needle

The finished plate ready to etch.

Once the drawing is complete the plate is ready for the etching process. Here the plate is placed into nitric acid, a process which takes approximately a day, as I take it in and out of the acid, checking for the depth of bite, and stopping out areas of the plate with acid resistant varnish to prevent further etching. I use a large feather to gently brush away any bubbles that appear on the surface of the copper plate which, could potentially prevent the acid biting cleanly.

After etching is complete, the acid is washed off. The image begins to emerge as the wax ground and varnish is removed. Nerve racking as its the first time that you truly know whether the plate has etched as you want it.

These cut out plates, which allow me to give more space to the finished print, require further filing and burnishing up to the edges of the etched image. The detailed filing around this fish took me a further six hours!

Once complete the plate is ready for printing. The paper is soaked overnight and laid down and covered for a couple of days. The plate is heated on a hotplate and stiff ink is forced into the lines. Excess ink is removed with wiping canvas and hand wiped with french chalk before printing through the etching press. The plate has to be re-inked for each print.

The prints are dried between sheets of heavy blotting paper for several days before each one is hand coloured.