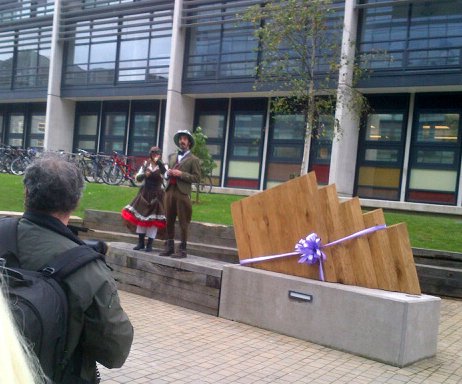 In October, as part of Sea Portraits, I was invited to the 150th Anniversary Celebrations of Plymouth University. A great day which included a tour around the campus, slightly challenging as I was on crutches! and my first view of the Sea Portraits which were on show in the Portland Square building.

Our 150th anniversary day is an opportunity to mark 150 years since the establishment of the School of Navigation on 24 October 1862 – it’s our Birthday! Join our ‘Curious Campus’* – a promenade performance taking us on an interactive adventure through time with a famous Victorian tour guide, leading to unveiling and prize giving ceremonies launching our exciting 150th anniversary legacy projects. Enjoy live entertainment en route from student acrobats, musicians and artists, and explore a range of exhibitions in art, literature and

I was also fortunate to be able to visit the Tectona, a beautiful Gaff ketch which I have seen many times under sail in the Sound and is now used as a sail training vessel. She had recently completed a twelve-week voyage around the UK, the ‘2012 Voyage of Recovery’ www.tectona.org.uk www.theislandtrust.org.uk

The ketch, TS Tectona, formerly the training ship of Plymouth School of Navigation, will be moored at Commercial Quay Pontoon, Plymouth Barbican during the day and will be open to visitors between 2pm and 4pm. The two new vessels of Plymouth University – the Research Vessel Falcon Spirit and the 45 foot training yacht Take the Helm – will also be alongside the Barbican Landing Stage, paying tribute to the history and legacy of Tectona. They too will be open to visitors at this time. Tectona is now privately owned and run by the Tectona Trust, and has recently completed a Round Great Britain ‘Voyage of Recovery,’ and is involved with Plymouth University and the Plymouth University Peninsula Schools of Medicine and Dentistry in aspects of medical research associated with Sail Training. She is operated by Island Trust of Cremyll.

And to keep the celebrations going until late, Plymouth University Students’ Union are organising a 150th anniversary gig in the main hall on campus with student bands playing throughout the evening – further details on their facebook page at www.facebook.com/events/366105426811893.

This special 150th birthday event is part of the many celebrations being held during our anniversary year which culminates in December 2012. More information including highlights from the year can be found at www.plymouth.ac.uk/150.